Providing optimized infrastructure for both on-premises and cloud environments

The new Fujitsu SPARC M12 servers join the vibrant SPARC technology ecosystem, and together with Oracle’s SPARC systems they leverage the unique security and scalability features of the Oracle Solaris operating system, as well as the efficiency and versatility of the Oracle VM Server for SPARC virtualization software.

The new servers can help customers optimize investments in ICT infrastructure and create new value based on cutting-edge digital technology.

The forerunner of the Fujitsu SPARC M12 servers, the Fujitsu M10 server line, has been adopted by many customers as the core of their ICT infrastructure. Fujitsu M10 servers have contributed to optimized ICT investments by providing stable processing power for mission-critical databases at the foundation of corporate business, and reduced search time for information databases used in corporate marketing to 1/300th that of previous technology.

In recent years, as the Internet of Things (IoT), big data and artificial intelligence (AI) have become more prevalent in companies and society, there has been an ever-increasing volume of data to be processed, leading to demands for even greater performance, combined with a reduction in operational and management costs. 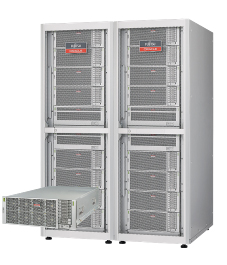 Features of the Fujitsu SPARC M12

Performance per CPU core is a significant measure to consider when increasing data processing efficiency, and Fujitsu SPARC M12 servers offer up to 2.5 times better core performance compared to the previous Fujitsu M10 models. The Fujitsu-developed SPARC64 XII processor, with the world’s highest per core performance, maximizes processing capability in mission-critical systems and databases without increasing server complexity, contributing to the optimization of customer IT investments.

Software on Chip(2), a feature carried on from the Fujitsu M10, accelerates database processing by leveraging the fact that use of in-memory databases for processing large volumes of data has been very effective in the cloud, expanding the number of simultaneous searches to twice that of the Fujitsu M10 when processing with Oracle Database In-Memory. The Fujitsu SPARC M12, which can dramatically accelerate a wide range of data processing, supports the digital transformations of customers by improving the efficiency of mission-critical systems, speeding up decision-making using big data, and improving customer services through multilateral information analyses.

Fujitsu cutting-edge IT expertise has been used to develop Vapor and Liquid Loop Cooling (VLLC) technology(3). This industry-first cooling technology reliably cools the interior of the server through the phase change of liquid to vapor, roughly doubling cooling efficiency(4), and enabling safe and stable operations when building a private cloud environment with multiple Fujitsu SPARC M12 servers installed in a data center.

Fujitsu SPARC M12 servers provide CPU Core Activation functionality, for configuring CPU resources one core at a time from a minimum of just two cores per server. CPU Core Activation allows servers to be configured to meet business needs, with the dynamic flexibility to grow as needed.

ITOCHU Techno-Solutions Corporation (CTC) welcome the announcement of a new product to the SPARC platform. Leveraging our broad implementation experience and SPARC server know-how, CTC have been offering safety and confidence to customers by providing various services, such as POC, system integrations and operations or maintenance support services. I am confident that the combination of SPARC servers, equipped with the world’s highest performance processor, the SPARC64 XII, and CTC’s solutions and services will contribute to optimizing customers’ IT investments.

Oracle and Fujitsu have worked together for more than three decades to produce SPARC systems satisfying the demanding requirements of mission critical infrastructure. Fujitsu SPARC M12 servers featuring the new SPARC64 XII processor for extreme core performance is an exciting addition to the SPARC family, allowing customers to address their most difficult computing challenges with systems that offer both high performance and enterprise reliability.

The revolutionary technology of the Fujitsu SPARC M12 enables real-time connections between people, businesses and a variety of things, and represents a step toward achieving Fujitsu’s aim of a Human Centric Intelligent Society. In addition to the Fujitsu SPARC M12, which is a result of close collaboration between Fujitsu and Oracle, Fujitsu will continue to develop cutting-edge technology that contributes to the creation of new value and supports customers in expanding their businesses.

Oracle and Java are registered trademarks of Oracle Corporation, its subsidiaries, and its affiliates in the US and other countries.

UNIX is a registered trademark of The Open Group in the US and other countries.

SPEC and the SPECint benchmark name are trademarks or registered trademarks of Standard Performance Evaluation Corporation (SPEC) in the US and other countries.

All other trademarks referenced herein are the property of their respective owners.