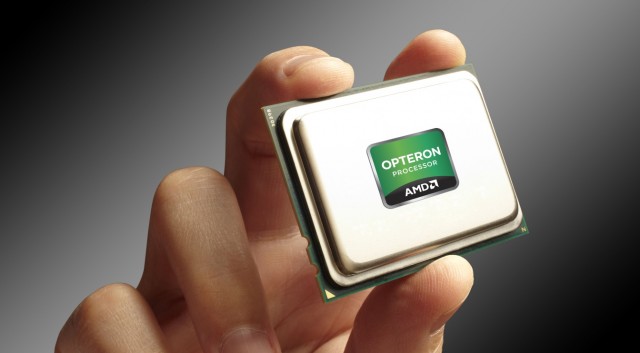 AMD’s 32-core Naples is the next Zen chip on deck for release, and it’ll be in servers in the first half of 2016

At CES, AMD launched its first Zen chips for PCs, called Ryzen. Next on deck is the 32-core server chip code-named Naples, which will ship in the coming months.

Naples doesn’t have an official name yet, but the expectations are high. While Ryzen is set up for success in PCs, it’s a different story for Naples, which has to take on Intel’s juiced-up Xeon chips, which are used in most servers today.

AMD is trying to drum up excitement for Naples, which will be released in the first half of this year. It’s promoting Naples using the same tactic as it did for Ryzen — by talking about the performance benefits of the Zen CPU.

The Zen CPU core in Naples will provide the same performance benefits as in the Ryzen chips. AMD claims a 40 percent improvement in instructions per cycle, an important metric to measure CPU performance, compared to the company’s previous Excavator architecture.

Naples is notable for its high 32-core count, more than Intel’s Xeon chips, which have up to 24 cores. The Intel Xeon Phi supercomputing chip has up to 72 cores, but it isn’t targeted at mainstream socketed servers.

A higher core count matters as servers can do more, Forrest Norrod, senior vice president and general manager at AMD, said in a blog entry this week.

More data is moving into the cloud, which is putting more strain on servers in data centers. More cores will add processing power to help servers respond quickly to search requests, recognize images, and process uploaded videos faster. A server with a single CPU will be able to do as much as a current two-socket server, Norrod said.

A bulk of the servers today use quad-core chips, and the actual market for 32-core Naples will be limited. The server market is dominated by two-socket servers, while Intel’s 24-core chips go into a four- and eight-socket servers, which are used by companies like financial institutions that need a lot of horsepower.

“Intel has used Xeon to bleed the market” by forcing people to buy two-socket servers, and AMD could change that trend, McGregor said.

AMD will also pack in new memory bandwidth technology, which will boost server performance and possibly give it an edge over Xeon, McGregor said. It’s not clear what the technology will be, but it could be based on technology from Gen-Z, a consortium that is developing a high-speed throughput for use inside and outside servers.

AMD has surprised Intel in the server market in the past, only to self destruct. In 2003, it came out with the first 64-bit x86 server chip called Opteron, and Intel had to scramble to catch up. AMD lost the lead with its Opteron chips based on the Bulldozer architecture, which underperformed and were rejected by server makers.

The company killed whatever server market presence it had with another fateful decision to switch architectures. In 2013, AMD took the radical decision to put x86 on the backburner and reboot its server strategy around ARM architecture. AMD believed the power-efficient ARM chips would ultimately replace x86 in servers and have a 20 percent market share by 2017, but that hasn’t happened.

Realizing its mistake, AMD reversed course, moving away from ARM for servers and switching back to x86 with Zen chips. In the meantime, Intel took advantage of AMD’s missteps and steadily rolled out new Xeon chips that supported the latest technologies. Intel now holds more than a 90 percent market share in server processors.

AMD has a big challenge with 32-core Naples. Companies like Google, Facebook and Amazon are building mega data centers with servers based on Xeon. Those companies have software stacks tuned closely to the processing, I/O, power, and throughput specifications of Xeon chips, and it could be tough for AMD to break into large accounts.

But AMD’s Naples is the first legitimate x86 challenger to Xeon in years. Google, Facebook, and Amazon could use AMD’s chip as leverage to get better chip prices from Intel. Xeon chips are expensive, and the margins make them highly profitable products for Intel.

Companies won’t make a switch to AMD overnight; it could take a year or more to ensure applications work on the new chips. But the competition is good, and AMD has nowhere to go but up in the server market, McGregor said.

AMD also has some technologies that could work to its advantage. It has mulled pairing a Zen server chip with its Vega GPU, which could be useful for tasks like machine learning. The company has also released a GPU targeted at machine learning called Radeon Instinct, but that’s effort is targeted toward Nvidia’s Tesla GPU, which dominates data centers.

Server wins for Naples are already coming AMD’s way. The company is also chasing the Chinese server market — which is growing fast — by licensing its Zen design to THATIC (Tianjin Haiguang Advanced Technology Investment Co.), a joint venture between AMD and a consortium of public and private Chinese companies.

By Agam Shah, source by NetworkWorld