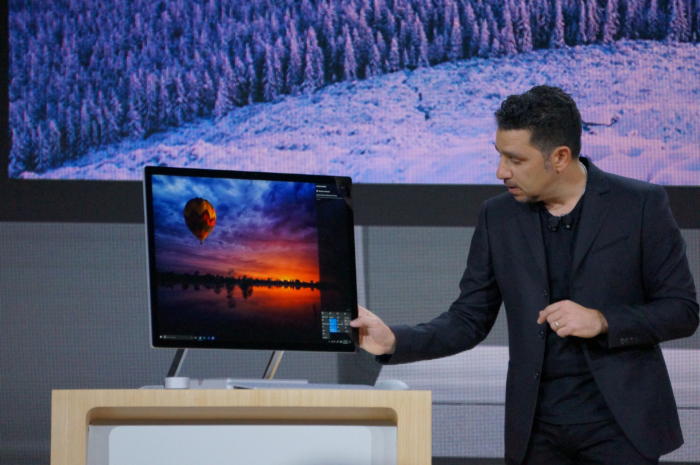 NEW YORK — Microsoft yesterday announced a slew of software and app updates, as well as both improved and entirely new hardware devices. While rumors have floated around about the next Windows 10 update from Microsoft, suggesting it would carry the name “Redstone 2,” the update Microsoft unveiled is called Creators Update.

As its name suggests, it’s aimed at creators, which Panos Panay, chief of devices at Microsoft, emphasized extends to more than artists or those with jobs traditionally considered creative. Microsoft’s definition includes anyone who creates anything — be it in Word, PowerPoint, Excel or Photoshop. Panay says everyone should have intuitive, functional software that allows the user to create the best documents, images and files possible.

It’s hard not to compare Microsoft to Apple. One of the strongest aspects of Apple products comes from its tightly knit ecosystem of apps and operating systems, which sync seamlessly across iOS and MacOS devices. You can go from your iPhone to iPad to MacBook without skipping a beat and Windows wants to bring that same convenience to its users.

With the Creators Update, you will gain more of this type of continuity with the capability to send text messages from any Android or Windows phone directly on your desktop, similar to iMessage. Your most commonly accessed contacts will also appear as bubbles in the task bar, allowing you to easily send, check or search all of your emails, messages and shared files with that contact. And if you want to share a photo or video, you can simply click the Share Charm in Microsoft Apps, which will instantly suggest your favorite contacts so you can share with one tap.

The Creators Update will start rolling out in the spring, but it will be free for all devices currently running Windows 10.

While the highly rumored Surface Pro 5 never made the stage, Microsoft did announce updates to its Surface Book. The Surface Book, which is a high-performance notebook-tablet hybrid, has been updated to include an Intel Core i7 processor, improved graphics — which Microsoft claims will be three times better than those on the highest configuration of the 13-inch MacBook Pro — a second fan for cooling and a purported 16-hour battery life.

However, Microsoft remained silent on the device’s design, which ultimately remains the same. It’s notable because one of the biggest gripes of Surface Book users is the gap that exists between the display and the keyboard, which is a result of the hinge. It appears you will have to wait another year to see if that design issue is addressed. You can currently preorder the updated Surface Book and this new configuration will retail for $2,399.

Microsoft also unveiled a new addition to the Surface family — the Surface Studio. A sleek, aluminum, all-in-one desktop computer. The Studio boasts a 28-inch display with 13.5 million pixels, which Panos noted is 63 percent more pixels than you’ll find in a 4K TV. According to Microsoft, the Surface Studio boasts the thinnest LCD screen ever created, measuring 1.33 millimeters, as well the thinnest overall touch-display at just 12.33 millimeters thin. The flexible display can also rotate back to a 20 degree drafting angle, making it a good fit for designers.

The Surface Studio retails for $2,999, and is available to pre-order. Microsoft did caution that the device will be in short supply with limited quantities available for the upcoming holiday season.

Microsoft also introduced the Surface Dial, a small, spherical, puck-like device that acts as a companion to all Surface devices. In fact, it will be retroactively compatible with the Surface Pro 3, Surface Pro 4 and the first iteration of the Surface Book. Connected by Bluetooth, and running on two AAA batteries, the Dial can be used off to the side, almost like a mouse, using haptic feedback to interpret common gestures that will activate different actions on the display. The Dial lets you zoom in or out, manipulate content, select new colors to draw with, alter the perspective of a 3D image and change settings on the device such as brightness or volume, among a number of other features.

Alternatively, you can also press the device directly on the screen to bring up menus, working seamlessly as you navigate the display with the Surface Pen. This specific feature works only on the Studio, but it could mean a lot for artists — allowing them to use the Surface Pen in one hand, while navigating menus with the Dial, never having to put the Pen down once.

The Surface Dial will be available November 10, and will retail for $99; if you pre-order a Studio, you’ll receive the Dial for free with your shipment.

Paint has been a standby Windows program and, for the most part, it’s form and function has remained mostly the same. But with the Creators Update, Paint is getting an overhaul to include 3D technology. You will now be able to import 2D images and create 2D sketches that can be transformed into 3D images. There’s also integration with Minecraft, allowing you to create, share and 3D print their creations on a Microsoft community website, Remix 3D. 3D creations carry over into other programs as well, with the capability to import them into PowerPoint or Word to bring life to documents and presentations.

HoloLens also received some updates. Manufacturers such as Dell, Lenovo, Asus, Acer and HP will now sell VR headsets starting as low as $299. As demonstrated at the event, HoloLens will allow you to go on virtual vacations, relax in your virtual home, and access the same apps and programs you would on your desktop via VR goggles.

ICT Hardware is one of Microsoft Partner