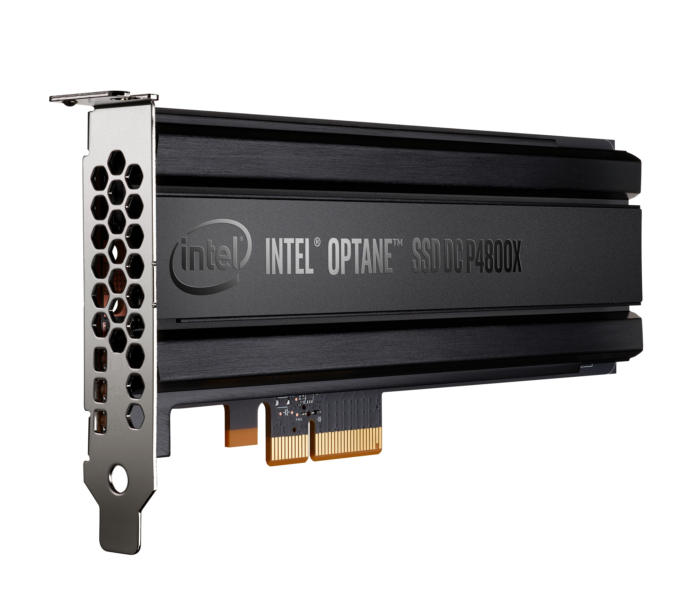 Intel’s first Optane storage modules came out in early January, but were only 32GB. Larger Optane drives with up to 1.5TB of storage capacity are on their way, and we now have a better understanding of how they’re going to perform.

The first large-capacity Optane SSD drive is the DC P4800X, which has 375GB of storage and started shipping on Sunday. The $1,520 SSD is targeted at servers. (Intel didn’t provide regional availability information.)

These SSDs will fit as add-in cards in the PCI-Express/NVMe and U.2 slots. That means they could work in some workstations and servers based on AMD’s 32-core Naples processors.

Optane will also ship in the form of DRAM modules next year. Intel did not share information on when it would ship consumer SSDs.

Optane has been hyped as a new class of superfast memory and storage that could replace today’s SSDs and DRAM. Intel has claimed Optane is up to 10 times faster than conventional SSDs.

The technology underpinning Optane is 3D Xpoint, a form of memory that stores data based on the resistance of cells. Intel developed 3D Xpoint with Micron, which later this year will release an Optane competitor called QuantX, aimed at enterprise SSDs.

For the first time, Intel has shared internal benchmarks on the large-capacity Optane drives compared to conventional flash SSDs. The Optane SSD DC P4800X was pitted against the three-year old SSD DC P3700 flash SSD, which is considered one of Intel’s fastest data-center SSDs in terms of random reads and writes.

The benchmarks indicate that the new Optane drive, in most real-world uses, won’t reach the levels of performance that Intel has been hyping up to now. On top of that, the benchmarks were conducted in complex environments that made the numbers hard to interpret.

In a nutshell, Intel said that if you run sequential tasks, it would be better to use conventional SSDs. Optane lights up when running random reads and writes, which are common in servers and high-end PCs. Optane’s random writes reach up to 10 times faster compared to conventional SSDs, but only when utilization is being pushed to extremes, while reads are around three times faster.

In a standard 4K data block, with 70 percent read and 30 percent write, the P4800X was five to eight times faster than the older P3700. The responsiveness of the drive increased with the data load.

Aside from the unusual benchmarking presentation by Intel, Optane has promise, and it could be the storage technology of the future. However, flash-based SSDs are well-established and Optane won’t unseat them overnight, according to analysts.

Optane is more expensive and still being developed, and joins the ranks of other technologies like MRAM (magnetoresistive RAM) and RRAM (resistive RAM) trying to unseat flash.

Intel took a long time to develop large-capacity Optane SSDs, and there is some concern about the drive’s durability. The P4800X has a five-year warranty, but it remains to be seen how long the drive will last.

Storage is a big bottleneck, and the Optane SSDs will reduce latency. That will improve the productivity of servers, and will help in applications like analytics, which deal with large data sets. Optane could be used for for caching or long-term or short-term storage.

Optane SSDs could also be used to expand memory capacity in servers by mimicking DRAM with the help of a hypervisor, Myers said. To make this happen, Intel will sell software called Memory Drive for Optane drives. This feature will only work on servers with Intel’s upcoming Xeon chips based on the Skylake architecture, and won’t work with AMD chips.

Applications that will benefit from Optane include MySQL and Memcached, which are popular with cloud providers. Data movement in servers run by companies like Facebook and Google is fast to ensure instant responses to social media or search requests.

Intel’s Myers also saw the storage fitting into hyperconverged environments, in which Optane is closer to the CPU, or in an array. Optane isn’t a particularly good fit for typical networked storage arrays like EMC’s EqualLogic, which are extremely popular, but Myers is pinning hopes on companies moving to hyperconverged infrastructures.

Intel estimated that two servers with P4800X drives could provide 10 times more MySQL transactions than with P3700 SSDs. It would also result in a 91 percent reduction in cost per transaction.

But there’s a heavy cost involved in changing the data-center infrastructure to fit the superfast Optane drives. In the long run, the Optane drives may be beneficial in speeding up database, cloud and machine-learning applications, but switching over to a hyperconverged environment could call for wholesale changes in server hardware, virtualization environment, and organization of storage in data centers.

Companies are increasingly backing Optane, Myers said. Facebook has been trying out Optane for more than a year, but hasn’t reported results. IBM has incorporated Optane storage in its Bluemix cloud service, but hasn’t talked about benchmarks.

Hewlett Packard Enterprise is going to offer Optane SSDs as a media option in 3PAR arrays. The current latency for all-flash arrays is about 400 microseconds to 1 millisecond, and with 3D Xpoint/Optane it will come down to 200 microseconds, said HPE’s Eduardo Duarte, 3Par product manager, in a video at the Discover trade show in London in December.

In addition, a range of companies including Lenovo, Nutanix and Dell Technologies have confirmed that they will come out with hardware based on Optane.

By Agam Shah, source by ComputerWorld